It was in 2003 that the United States Supreme Court struck down Texas' sodomy law in the a monumental ruling with Lawrence v Texas. Though it cannot be legally enforced, The Austin Statesman points out that, eight years later, "homosexual conduct" is still listed as a crime in that state. 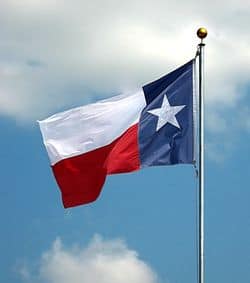 The paper reports on the importance of removing the law:

"'By leaving it on the books, you create the potential for abuse," said Jim Harrington, director of the Texas Civil Rights Project, which is representing two gay men who were kicked out of an El Paso restaurant in 2009 for kissing in public.'"

Refresh your memory about the El Paso kissing incident, where an officer cited the "homosexual conduct" law, here.

Lawmakers in Texas have decided it's not worthwhile to pursue changing the law.

"The GOP domination is also reflected in the Criminal Jurisprudence committee, which would be the first to vote on Farrar's or Coleman's bill. A Democrat chairs the committee, but Republicans — including Wayne Christian, the most recent president of the Texas Conservative Coalition — outnumber them two-to-one."

"Christian said he had not looked at the bills in detail, but that the time it would take them to go through committee probably would not be worth the outcome — especially in a session where lawmakers are wrestling with major issues like redistricting and filling a multi-billion-dollar budget hole."

"'In this particular session, I'd be hesitant to do any changing,' Christian said, adding that the law probably 'better reflects the views of a lot of citizens' as it is."