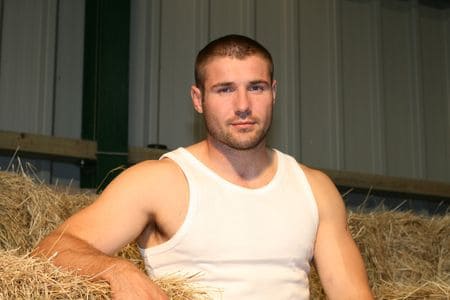 UK Rugby player Ben Cohen has been a very vocal straight ally to the gay community for years. In 2009, he openly stated that Rugby was ready for an openly gay player just months before Gareth Thomas' momentous coming out and earlier this year shot an anti-bullying video alongside Bravo's Andy Cohen. I spoke to him as he prepares to visit the United States in May for his Ben Cohen Acceptance Tour.

SP: You've recorded a couple of anti-bullying videos with words of support toward suicidal or bullied young people. What would you say to those who are doing the bullying?

BC: I say simply stop and think. What is that person were to finish their life because of you. How would that feel? Also, bullies often have issues of their own – why else would they do it. Maybe they need to face their issues.

SP: Have you yourself ever been the victim of a  bully?

BC: Not in the true sense of the word but I have been the victim of the media at times – goes with the territory, but it is still not nice. You have to say to yourself "Don’t take it personally" but thats not easy –especially when the claims made about you are unjust. It’s frustrating.

SP: You're touring the USA this summer with your "Acceptance Tour 2011" to combat homophobia. What sparked the idea for the tour?

BC: For some years now we have been receiving messages and emails from people all over the world with some heart wrenching stories. I really felt that I wanted to do something about it and I felt that I could. The video I made sparked off all sorts of things really, as well as emotions in me as a sports figure and as a Dad, so we started thinking about what we could do. Then we received an invitation to go to a sports bar in New York. And then a proposal from a Gay/Gay Friendly rugby club in Atlanta at the same time. We work with Geoff in Florida who just came on the team to help Jill with the Calendar, but then became involved representing my work in the USA and he has been linking up ever since pulling everything together. Exciting times!

Read the rest of the interview, AFTER THE JUMP.

SP: What's the biggest difference between your USA fans and your UK fans?

BC: Apart from the fact that they generally have different accents, there are no real differences. The large majority are just nice people getting on with their lives the best way they can. I have met some great people over the past few years and I am very humbled at their response to me.

SP: How does your wife feel about all of the attention you get from your gay fans?

BC: She is absolutely fine with it. We have really good friends who are gay and they’re always round for lunch as one of them, Rob, has a horse at our stables. To be honest, she doesn’t tend to get too involved with what I do. She looks after our twins and is always busy with all the animals we have and that is her priority. When I get home I’m just husband and dad so it’s very levelling. She’s interested of course but she is cool with it – totally.

SP: You're clinically deaf. How does that effect your playing on the field?

BC: I am 30% deaf in each ear which tends to mean I can’t hear people. So that can be a challenge on the pitch but I have a keen eye and make up for it there. I do get teased quite a bit about it. It does worry me a bit though because sometimes people think I am being rude and that I am ignoring them, but in fact I haven’t heard them. I have got hearing aids but I don’t wear them. I also get tinnitus. I remember we went to the Scissor Sisters concert recently and then met the band afterwards. My ears were ringing like church bells after all the loud music so that challenged my lip reading techniques. 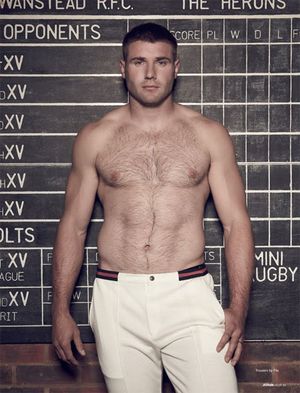 SP: You've said in the past that you're not that pleased with your body. What would you change about it?

BC: No, I’m lucky to have a fit, healthy body. It does a good job for me so I wouldn’t change it really. The thing is, if I wanted a ripped 6 pack, I could get one – I know how to do it, but fit and healthy is more important to me. My spare time is spent with the family rather than down the gym.

SP: How have other rugby players reacted to Gareth Thomas' coming out?

BC: It really wasn’t an issue at all. We just carried on treating him the same as ever. He’s a real character and was still the same guy we had been playing rugby with for years, so, no change.

SP: After coming out, Thomas was pelted with homophobic slurs from some fans. Do you think the attitude of fans is changing for the better?

BC: I wasn’t aware of that at all and that surprises me really if that is the case. It really doesn’t sound like rugby at all so it must have been an isolated incident. I think there is far more awareness these days surrounding equality generally so I think the average person would think twice about saying anything disrespectful. You are always going to get the exception to the rule though, but all I can say is that is rugby, it’s all about the sport as opposed to the sexuality of the players.

SP: You're no longer with the Sale Sharks team. What will you do now? Will you continue to play rugby or take this time to do something else?

BC: I’m with Sale until the end of the season in May and then – who knows. I would like to continue to play rugby if the right offer comes along.  It’s a waiting game at the moment so time will tell. I’ll make up my mind when I know what’s available. I have a variety of options so I’m not going to rush into it at the moment.

SP: Would you ever take up acting?

BC: I’d love to do acting – not sure how good I would be at it though. I would certainly give it a go. There have been some offers and there may be a few things in the pipeline but again, we will have to see. I know, I’m being cagey!