Those of you who have been following this site for a while will remember Crystal Dixon. In 2008, I posted about the  then University of Toledo associate vice president of human resources, who was fired after writing an article in the Toledo Free Press in which she said gays "violate God's divine order," and later told reporters at her church that she had a divine mandate to write the column. 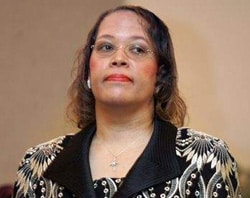 Said Dixon in the article, "As a Black woman … I take great umbrage at the notion that those choosing the homosexual lifestyle are civil rights victims. I cannot wake up tomorrow and not be a Black woman. Daily thousands of homosexuals make a life decision to leave the gay lifestyle."

Last I heard, Dixon was suing the university, though I'm not sure what the result was.

Anyway, Dixon has been hired to lead a human resources department for the County and City of Jackson, Michigan:

Interim county Administrator Adam Brown said Dixon’s level of experience and professionalism put her “head and shoulders” above other candidates…City and county officials said Dixon was up front about her termination from the university. They said her level of professional experience was more important than her political views.