Washington Post columnist Petula Dvorak reports on a gay couple who were dumped from their cab last week in the nation's capital because of a kiss, a "peck" as it was described: 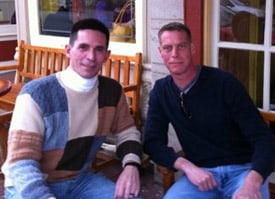 “My cab is not a bed. You cannot have sex in my cab!” declared the driver, who ordered the couple to get out of his taxi.

Stunned, the two men got out of the cab, just a few blocks from the restaurant. It took Fredge’s partner, Christopher Holloway, 51, a little longer to get out. Recovering from double hip surgery, he was using a cane and wasn’t moving so quickly.

The driver demanded that the men pay $6.35 for the four-block ride and unceremonious dump. When they refused to fork over the money, the cabbie warned them that he’d call the police for nonpayment, said Fredge, who works in human resources at a Georgetown hotel.

“Too late; I’m already calling 911,” Fredge told the driver, who then sped off.

The men were devastated by what happened.

“I’ve lived all over. In Missouri, in Texas, in Germany, California, Tennessee,” Holloway told me. “I’ve never been treated like this anywhere. It’s one of the reasons I live here, because it is such a tolerant, friendly city.”

That's what they said about New York too. Always try to remember to get the cab and driver's ID number. It will help things out immensely.