Nearly two years ago Air France flight 447 went down in the Atlantic Ocean between Rio de Janeiro and Paris, and up till now there have been few solid answers as to the cause of the crash. 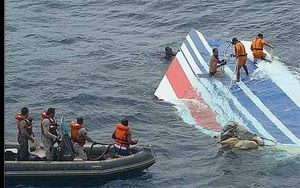 New wreckage has been discovered:

Investigators have found bodies among the wreckage of an Air France plane discovered around 4,000 metres (2.5 miles) deep in the Atlantic Ocean, nearly two years after it dropped out of the sky.

Flight AF447 from Rio to Paris disappeared on 1 June 2009, killing all 228 people on board. In the days after the crash around 50 bodies and several hundred aircraft parts were picked up out of the water.

Despite three costly searches, nothing more was found until Sunday, when undersea robots discovered part of the aeroplane's cabin containing bodies.

The gruesome find shows the aircraft did not smash to pieces when it hit the sea, as previously thought.

The black box flight recorders have not yet been located, however, but the tight debris field has given investigators new hope that they will be.