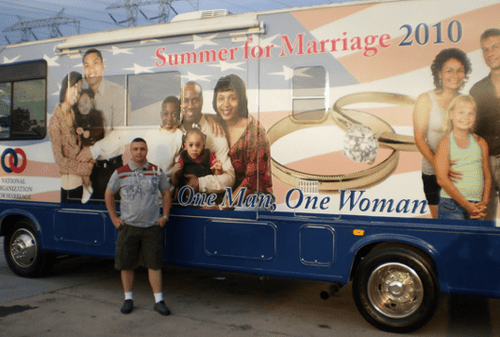 Louis Marinelli, an anti-gay activist who had a major role in the National Organization for Marriage's 'Summer Marriage Tour' in which the group held rallies via bus around the country, has resigned from the organization and has decided to support full marriage equality because of exposure to the NOM tour. 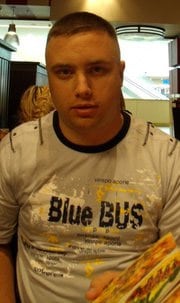 Writes Good As You:

"While still not in full support of homosexuality on some levels (where he needs our help to correct misinformation), Louis is now [a] repudiating virtually all of the vitriol that he put on the public record; [b] is owning up to the major role that he's played with NOM, including admitting that he was the impetus behind the whole summer tour; and [c] is coming out in full support of the civil marriage rights that gay people are seeking. And even more important that that: He, the man who gave NOM its official "protect marriage" Facebook page and who has been working as an independent contractor with the org. ever since (and still is, reporting directly to Brian Brown, at least up until the moment this post goes live), quite literally credits exposure to the NOM tour as the very thing that led to his change of heart!!!!!"

Here are a few of Marinelli's new statements (and there are many):

As a supporter of civil marriage equality, any statements I’ve made in the past about not recognizing homosexual relationships for one reason or another, of course it goes without saying that I no longer stand by these comments and I apologize for the insensitivity. Same-sex couples, whether they are married, in civil unions or domestic partnerships, ought to be recognized for what they are.

I consider myself agnostic and while homosexual acts may very well be “immoral” in the eyes of Christian morality, I can no longer stand by any comments I’ve made in the past about the immorality of homosexuality. There are a variety of different sets and sources of morals and no one has the right to impose their set on the rest of society.

Once I wrote that homosexuals are deceitful people who care only about themselves or something to that effect. Honestly, aren’t we all? It was wrong for me to exclude everyone else from that description. We all lie and when it comes down to it, we will do what is best for ourselves. So throwing in a little levity, I stand by the comment but want to apologize for limiting its scope to the gay community.

Good As You has a huge post on all this, with much more. I encourage you to go and read it.