The New York Times has published an article about the current state of marriage equality and, in it, asks if we're amidst a tipping point in the fight. The article takes a look at how the two opposing sides perceived King & Spalding's decision to drop the DOMA-defending case. 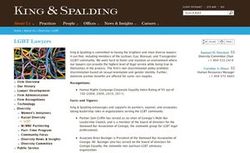 For many gay rights advocates, the decision amounts to a turning point in the debate — the moment at which opposition to same-sex marriage came to look like bigotry, similar to racial discrimination and the subordination of women.

To opponents of same-sex marriage, the firm’s decision is the latest evidence that elite opinion generally and the legal culture in particular is racing ahead of popular opinion and shutting down a worthwhile debate.

The article also illustrates how overall attitudes toward gays and lesbians has picked up speed and appears heading heading in the right direction:

But it was only one indication of how quickly the battle lines are moving. In 2008, a federal judge in New York ruled that it was defamatory to call a straight man gay. Ten months later, a different judge of the same court, relying on what he called “a veritable sea change in social attitudes about homosexuality,” said there was no longer “a widespread view of gays and lesbians as contemptible and disgraceful.”

The second judge, Denny Chin, drew a comparison. In 1926, he said, New York’s highest court ruled that it was libelous to call a white man “colored” or “Negro.” Such rulings were common in much of the nation in the first half of the last century; they are unimaginable today in any state. The range of views that may be expressed in respectable circles can be a bellwether in judging what society is ready for, said David A. Bositis, an analyst at the Joint Center for Political and Economic Studies who has studied the politics of race.

“Part of the evolution of equality obviously includes moving from where statements are viewed as normal and accepted to being socially undesirable,” he said. “When some turning points in these struggles are reached, it becomes more and more unsavory to behave in some ways and take certain positions. In polite society, it’s no longer considered acceptable to make overtly racist statements.

“But in the case of gay rights,” he added, “those turning points still have a ways to go. I certainly can see that day coming. Compared with the civil rights movement for African-Americans, the movement for gay rights has proceeded with a remarkable degree of speed.”