A major break in the ongoing case of Lisa Miller and Janet Jenkins who have been embroiled in a custody case for almost a decade. The two were joined in a civil union in Vermont in 2000 and, two years later, Miller gave birth to a daughter named Isabella. The following year, the two ended their relationship. 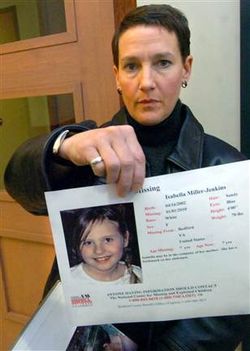 The AP has further details on the couple's past: "Lisa Miller then moved to Virginia, renounced homosexuality and became an evangelical Christian. She was granted custody of Isabella, but Jenkins got visitation rights. Courts in Vermont and Virginia have since ruled in favor of Jenkins on the custody issue, most recently in November 2009, when Rutland Family Court Judge William Cohen — frustrated by Lisa Miller's refusal to obey court orders — ordered her to surrender custody to Jenkins. Lisa Miller, who at one time lived in Forest, Va., failed to appear with the girl for a court-ordered Jan. 1, 2010, custody swap in which Jenkins was to take her. A federal arrest warrant has since been issued for her."

Last week, the FBI arrested a 34-year old pastor named Timothy David Miller (authorities do not believe he is related to Lisa Miller) for aiding in an international parental kidnapping. Miller is believed to have helped coordinate travel for Lisa Miller and Isabella outside of the United States and also arranged for them to live in their current location which is believed to be in Nicaragua. He has also been linked to Jerry Falwell's anti-gay Christian school, Liberty University.

Jenkins has released a statement through her lawyers: "I know very little at this point, but I really hope that this means that Isabella is safe and well. I am looking forward to having my daughter home safe with me very soon."