Republican lawmakers in Texas have introduced legislation that would strip marriage rights from transgender people, the AP reports: 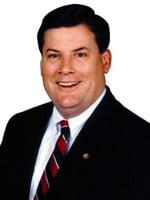 One of the Republican sponsors of the legislation said he's simply trying to clean up the 2009 law in a state that bans same-sex marriage under the constitution.

The legislation by Williams, of Houston, and Rep. Lois Kolkhorst, of Brenham, would prohibit county and district clerks from using a court order recognizing a sex change as documentation to get married, effectively requiring the state to recognize a 1999 state appeals court decision that said in cases of marriage, gender is assigned at birth and sticks with a person throughout their life even if they have a sex change.

Not only would the legislation strip away future marriage rights, it could nullify some marriages already in existence.

The legislation has passed a Senate committee vote and awaits approval but the full Senate. Similar legislation in the House has not yet had a hearing.