Two teen girls are under arrest for brutally attacking a 22-year-old transgendered woman at a McDonald’s in Baltimore earlier this week. A 14-year-old girl has been charged as a juvenile and charges are still pending for an 18-year-old who was also involved in the attack. A restaurant employee recorded the awful assault on his cell phone. 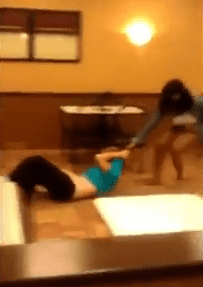 According to the police report: “(the victim) told police that she was walking to the restaurant’s bathroom when she ‘got into a verbal argument with two black females” who “began punching her in the face with their fists and pulling her hair.'”

WBAL reports on details of the video:

“The video shows the two culprits punching and kicking the victim. There is then a scene with one of the women dragging the victim across the floor, ripping what appears to be hair extensions or a wig from her head. On the video, you can hear at least one employee yelling for the attack to stop. Police charging documents show that another person tried to intervene and break up the assault, but the women punched her in the face, causing her to fall over. Police said that woman declined medical assistance…The man who shot the video appeared to have done nothing to help. On the video, he’s heard telling the attackers that the victim is seizing and that police were on the way.”

McDonald’s employee Vernon Hackett, who instead of attempting to stop the assault, filmed the incident on his cell phone and later uploaded it on to his now deleted YouTube channel.

The Smoking Gun has screencaps of messages concerning the incident from Hackett’s Facebook page, which has also since been deleted. One of the posts reads:

“That Was Not A Female That Was Getting Beat Up….That Was A Man….He Was Dressed Lik A Woman…And He Was In Tha Females Bathroom Knowing He Was A Man….And When Told To Get Out Tha ladies Bathroom He Got Smart With Everybody So Tha Two Girls Beat Him Up”

Equality Maryland has called for the attack to be pursued as a hate crime: “It does appear that the victim was a transgender woman, and she was brutalized while people stood by and watched…There’s no excuse for that violence under any circumstances, but we would encourage police to investigate as a hate crime.”

You may recall that the Maryland’s gender identity bill was killed in the state senate earlier this month.

McDonald’s has issued a statement: “We are shocked by the video from a Baltimore franchised restaurant showing an assault. This incident is unacceptable, disturbing and troubling. McDonald’s strives to be a safe, welcoming environment for everyone who visits. Nothing is more important to us than the safety of customers and employees in our restaurants. We are working with the franchisee and the local authorities to investigate this matter.”

A copy of the police report is here.

Watch the savage attack (wherein the victim apparently suffers a seizure), AFTER THE JUMP.

NOTE: BECAUSE OF THE HIGHLY SENSITIVE NATURE OF THIS POST AND THE WAY SOME HAVE CHOSEN TO ADDRESS IT, COMMENTS HAVE BEEN CLOSED.