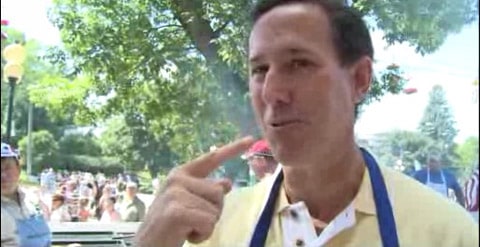 Rick Santorum has compared same-sex marriage to bestiality, has said that it's "common sense" to keep gays from marrying and adopting children, wants to reinstate the ban on gays in the military, and has said that gays shouldn't have the "privilege of government benefits" offered to heterosexual couples, yet in response to a remark made by Joy Behar during her interview with Don Lemon, Santorum claims he's not a homophobe.

I guess because you stand for traditional marriage and you believe that, you know, that people should, we should have a society that affirms one man and one woman as marriage, that makes you someone who’s a hater, someone that doesn’t, doesn’t like people. I disagree with people, by the way, who are gay and straight who believe in changing the marriage laws. But it’s a public policy discussion, and this is the, this is really the problem that we see on the left which is the personalization of politics. I mean, we have a policy disagreement, and, and which I am very passionate about. I admit that. Because I do believe the family, integrity of the family is important for the future of our country. But that does not mean that, that I don’t like people or I hate people or that there’s something wrong. The only thing that’s wrong is their opinion.