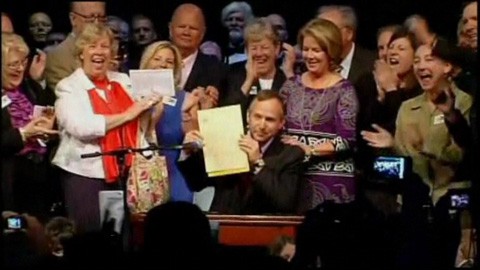 Markell signed the bill before a jammed, cheering house at The Queen in Wilmington. About 600 people were expected at the reception and signing organized by Equality Delaware, and it appeared that they all showed up.

Said Markell at the signing:

Tonight, with the signing of this law, we say to any Delawarean regardless of sexual orientation – if you’ve committed yourself to someone, and you’ve made that pledge to spend your life together in partnership, when life or death decisions come, we honor your right to make those decisions together.

Tonight, we say to loving and committed couples across the state who want the law to endorse the promise that they made long ago in their hearts – 'Your love is equally valid and deserving, your family is now equal under the law.'

And tonight, we say to children of gay and lesbian parents in committed relationships all over our state – and there are so many wonderful kids, including many here tonight, growing up in those families all over our state – we say to you: It doesn't matter if your parents are gay or straight. The people you love and look up to and that are dedicating their lives and love to raising you – those are your parents. You are a family. And while we’ve known it, and you’ve known it for years, tonight, that equality becomes real under law."

Watch the moment of signing, AFTER THE JUMP…