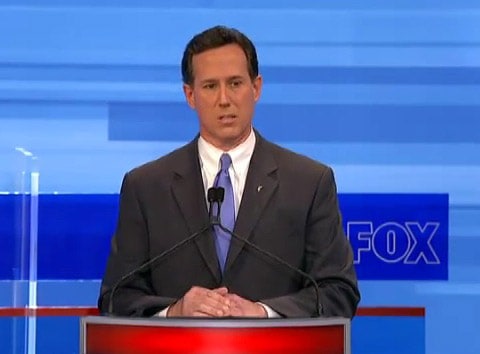 Cyrus isn't a fan of Urban Outfitters after stories emerged alleging that the store has copied jewelry designs, so she pointed out that the company's president had contributed to Santorum. “IF WE ALLOW GAY MARRIAGE NEXT THING U KNOW PEOPLE WILL BE MARRYING GOLD FISH’ – Rick Santorum UO contributed $13,000 to this mans campaign” tweeted Cyrus, mocking Santorum for some earlier remarks regarding gay marriage.

She also wrote about Urban Outfitters and Santorum: “Not only do they steal from artists but every time you give them money you help finance a campaign against gay equality.” It may not be the best news for Santorum, who is expected to launch his campaign next week since Cyrus has over a million Twitter followers. Fortunately for him, however, most are probably too young to vote. This particular remark was re-tweeted by hundreds if not thousands of people.

The last time we heard from "frothy mix" himself, he was failing to convince us that he's not a big homophobe.