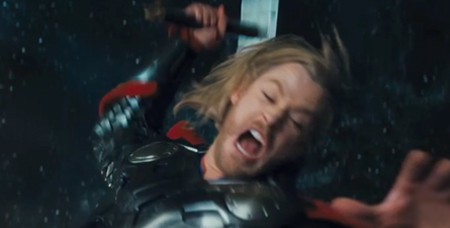 NOW PLAYING
It's not every day you drive right into a golden god while cruising around New Mexico's deserts.  But that's just what happens to Jane Foster (Natalie Portman) as THOR begins. She's chasing a thermo-magnetic storm (or some such) and a larger Einstein-Rosen Bridge / Wormhole type theory just at the precise moment that Thor (Chris Hemsworth), the arrogant god of thunder, is cast out of his home and exiled to Earth. She's torn between collecting soil samples and taking the muscle man to a hospital. Her humanity wins out, setting off Thor's awkward, humbling and often comic journey towards earning back his hammer-wielding mightiness.

"The Hammer is my penis."
-Captain Hammer in Dr. Horrible's Sing-a-long Blog 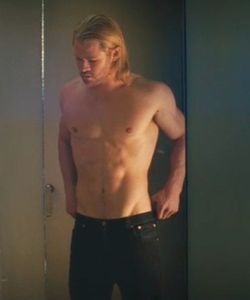 "Where did he come from?" Jane Foster and her team keep asking about this hunky arrogant delusional homeless man. His magic hammer also drops from the sky forcing others to ask the same question. The hammer is the source of his power but he's no longer able to swing it. He's frustratingly mortal all of a sudden. Once the mighty hammer is in the picture, and every man in driving range wants to prove himself man enough to swing it, the men from S.H.I.E.L.D. also show up to ask questions. Their agenda is less honorable than Jane's. They're here to remind you about the Iron Man movies and about other Marvel Movies heading into multiplexes soon.

So where did he come from? The answer is Asgard.

Turns out the Mythological Norse gods are real (Points for the Scandinavians!). They live in a golden castle near a rainbow bridge. Let's just say it's a spectacle, and that's always the point of $200 million dollar budgets, yes?.

The All Father Odin (Anthony Hopkins, who else?) had to exile his beloved son Thor due to his hot temper and war-mongering. The Thunder God had just reopened old war wounds between the Frost Giants of Jotunheim and the Gods. These all powerful foes haven't been at war since their last skirmish in Tønsberg Norway, millenia ago.

Perhaps understanding that this particular superhero is the odd man out in the overpopulated Marvel Universe, director Kenneth Branagh (chosen for his Shakespearean gravitas?) brings much campy pomp to the proceedings from the director's chair.

More Thor, AFTER THE JUMP…

The intentional humor and boisterous filmmaking save the film which would otherwise be laughable for the wrong reasons.

The performances help, too. Hemsworth makes a fine Thor, a bit remote maybe but appropriately self-possessed given the character at hand and capable of charm. He's also good at the film's intentionally played comedy at Thor's expense. There's even a joke about steroids, in case staring at this super body makes the audience feel too jealous and mortal puny. The situational and physical humor almost always work, though Kat Denning's scientist sidekick is saddled with a few dud "jokes". Tom Hiddleston even manages to make some small sense of the ostensible villain Loki (Thor's brother) which is a feat since the screenplay hasn't even begun to decide how evil, ambitious, angry, hurt, morally confused or mischievous Loki is. 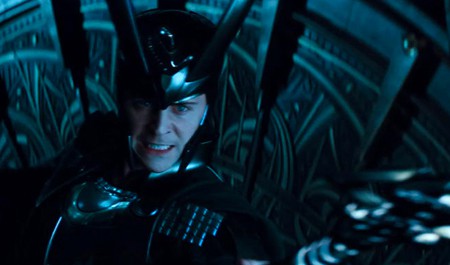 The action scenes are, on the other hand, disappointing. They're under-imagined and occassionally incomprehensible, even while they're easy to enjoy on a moment to moment or aural level (each magic weapon has its own obviously distinct "voice"). The battle on the rainbow bridge may be the worst offender in terms of "what just happened again?" as it reaches the film's climax.

But back to Thor, the man god. He's such a fish-out-of-water as superheroes go, that the question keeps nagging even after it's answered. "Where did he come from?"

The larger answer is the Marvel Universe. Marvel has been a comics powerhouse for many decades but their long term movie plan is modeled not on Asgard but on another magical kingdom, Disney. In the place of princesses we have superheroes, which are happily just as marketable. The key difference, beyond gender, may just be in storytelling. As Marvel grows their movieverse they seem perilously oblivious to the fact that movies, save for rare beasts like Harry Potter, need to be stand alone enchantments.

With each new Marvel movie, and its cumbersome connections to the last and next (Jane Foster is the lead scientist here but her achievements are downplayed in the post-credits tag, which surely has more to do with contractual actor price tags than narrative logic)  the movies seem less and less like movies and more and more like introductory chapters to a movie that hasn't even started yet. This may work in the short term but how can it possible pay off in the long term?

After so many introductory chapters, Joss Whedon's currently filming The Avengers (2012), which will unite Hulk, Iron Man, Thor and Captain America, would have to be seven hours long to feel like enough of a middle and an end for all of these beginnings. All of this prep work for a team movie has the unintended effect of making each would be blockbuster feel like disposable bloated chapter in some old pulpy movie serial. (Netflix Instant Watch Alert: Flash Gordon is available and its both hilariously dated cheese and timelessly hunky beefcake: Hello Buster Crabbe!) 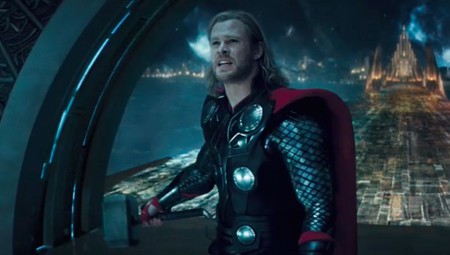 If you are planning to see Thor this weekend, see it in 2D. Like most 3D conversions the image is too dark and intermittently off-putting. Hollywood remains determined to make 3D the future of film but so far it only looks sensational in animated films or Avatar (same thing?). Though this technology is meant to add depth, fully immersing you in the imagery, it continues to have the ironic effect of making epic environments feel like tiny dioramas instead; you're NOT inside them, you're a god peering down into them. With that gaudy rainbow bridge as a set fixture, seeing Thor in 3D is a bit like playing with superhero dolls in dimly lit rooms, your floors strewn with glitter. Not that you've ever experienced such a thing.