Last Thursday I mentioned that Virginia Attorney General Ken Cuccinelli announced that the state was cutting its ties with law firm King & Spalding over the firm's decision to withdraw from the defense of DOMA. 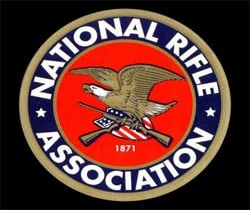 Said the NRA's letter to the firm, in part:

We are writing to notify you of our decision to terminate our legal services agreement with King & Spalding, effective immediately, due to the firm's decision to bow to political pressure and abandon a client in the midst of a legal representation. Specifically, our decision is motivated by your withdrawal as counsel for the Bipartisan Legal Advisory Group of the U.S. House of Representatives in defense of Section III of the Defense of Marriage Act.

We believe King & Spalding's decision is indefensible and raises serious concerns about its ability to be a reliable and effective advocate for any client facing potentially controversial litigation.

To be clear, our decision is not motivated by any position on the statute itself. As you know, the National Rifle Association is a single-issue organization dedicated to the protection of the Second Amendment. We are, however, often involved in controversial issues on which emotions can run high.