There's been a great deal of animosity between Barbra Streisand and Larry Kramer over the unsuccessful development of a film version of his 1985 play, "The Normal Heart." The failed collaboration led to Kramer publicly calling Streisand a "hypocrite" last year and the two are now trading verbal jabs in the pages of Entertainment Weekly. 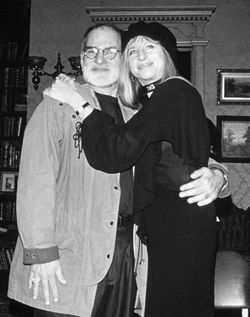 According to Streisand, Kramer was unwilling to allow adjustments that were necessary to make the script more cinematic. “I was using the best of [the play]. But there are certain things you do for film,” she tells EW. “Larry only wanted to use his screenplay. I couldn’t have my hands tied artistically.”

Kramer has another version of the story. He says Streisand rewrote the script to make her character the star, marginalizing the gay characters who are at the center of the play. “She cut Ned’s part so much that when she offered the movie to a major star who had played the part on stage, he said, ‘I can’t play this. The character has no motivation anymore,’” claims Kramer. “She subsumed all of the motivations into her part, as the doctor.” (A rep for Streisand did not immediately reply to request for comment on Kramer’s remarks.)

Streisand also says Kramer rejected a deal from HBO to turn the play into a TV project after major studios balked at its subject matter. “Larry wouldn’t accept their highest offer of $250,000. He wanted a million dollars,” says Streisand. “Larry held out for the money. I didn’t. Why not advance your cause? Why keep this movie unseen for all these years?” Kramer claims he never heard about such an offer and says Streisand repeatedly abandoned the project to work on other movies.

Glee's Ryan Murphy will now direct a film version of "The Normal Heart" starring Mark Ruffalo though, according to the actor, shooting may not take place this year as had been previously scheduled.