The New York Times today blasted Prop 8 proponents for their desperate attempts to throw out Judge Vaughn Walker's ruling overturning the ban on same-sex marriage because of his relationship with another man. 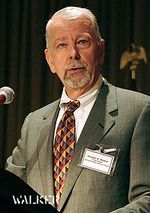 Given ample chance during a 13-day trial to offer an argument apart from prejudice, proponents of Proposition 8, the prohibition against same-sex marriage in California, found no evidence. Now they are trying to disqualify Vaughn Walker, the now-retired Federal District Court judge who ruled that the measure was unconstitutional.

Indeed, following the open-ended logic of Proposition 8’s lawyers, it is hard to think who, if anyone, is qualified to rule on this case. Certainly not wedded heterosexual judges whose marriages stand to be somehow diminished, according to the antimarriage crowd, if Judge Walker’s ruling survives appeal in federal circuit court.

AFER Board President Chad Griffin responded: “Legal experts, former judges and news organizations across the nation have strongly criticized the Prop. 8 supporters’ desperate action, calling it ‘absurd,’ ‘slimy’ and ‘deeply offensive.’ This is their latest baseless attempt to divert attention from the weakness of their constitutional arguments and the utter lack of evidence they provided in support of Prop 8.”