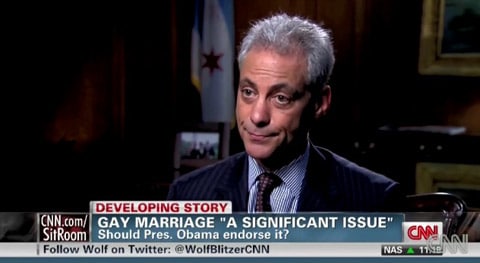 Chicago Mayor Rahm Emanuel was asked by CNN's Wolf Blitzer in an interview yesterday if Obama's refusal to endorse same-sex marriage was a big deal or little deal.

Emanuel refused to comment on what kind of deal Obama's position is on the issue, but stressed the progress that has been made for LGBT rights in his administration, and discussed civil unions in Illinois, noting that he hopes the Land of Lincoln would go further, perhaps the way of New York.

"It is a significant issue. I would hope that the state would move in that direction…Tremendous progress has been made across the country on a value statement and I think that's very important."