In April 2010, three bisexual softball players sued the North American Gay Amateur Athletic Alliance after it deemed them not gay enough to play in the Gay World Series and stripped their team of its second place finish. The lawsuit accused the organization of violating Washington state anti-discrimination laws. 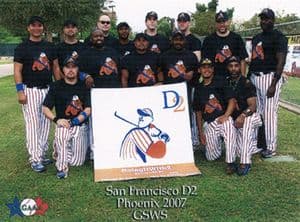 The plaintiffs — Stephen Apilado, LaRon Charles and John Russ — were members of the team D5, which made it to the finals of the Gay World Series in 2008.

During the game, the manager of another team filed a protest under the rule that limits the number of non-gay players. The men contend they were brought, one at a time, into a room containing as many as 25 people and questioned about their sexual preferences.

The panel members then voted on whether they men were gay or "non-gay." Several ballots were held, and the men said the process was humiliating.

This week, a federal judge refused a motion from the softball league to dismiss the lawsuit. But the judge did allow the league to keep in place a rule allowing it to limit to two the number of heterosexual members on a team.

The suit was backed by the National Center for Lesbian Rights in San Francisco, which had framed it as a push for bisexual rights. It contended the rule discriminated against bisexuals by not including them in the definition of "gay."

Coughenour rejected that contention in the broader sense by not issuing an injunction against the rule, but said "treatment of bisexuals remains of central importance to this case" and that the association "could still be liable for its actions" under the Washington Laws Against Discrimination for actions at the 2008 games.

To that end, the judge ruled that the association operated as a "public accommodation" by inviting public attendance, charging a fee and providing a service, and therefore must comply with the state's anti-discrimination laws.