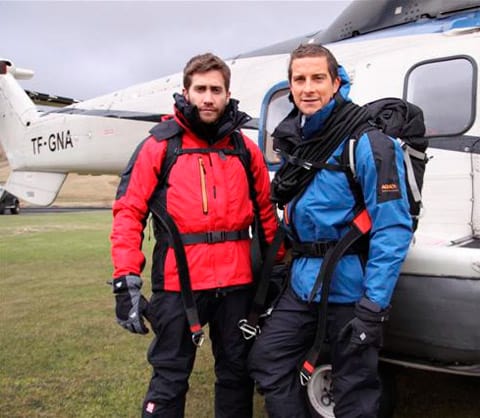 Jake Gyllenhaal will share an Icelandic snow cave with Bear Grylls on the premiere episode of this season's Man vs. Wild: 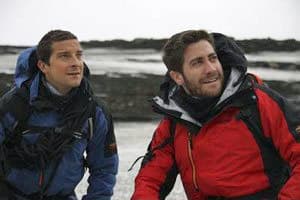 For two days, Bear and Jake embark on a survival experience neither will forget, to an Icelandic landscape dominated by mountains, huge glaciers and some of Europe's most active volcanoes. Jake will have to go where Bear goes, eat whatever Bear eats, and on occasion even take the lead, if he's going to cope with some of the worst conditions known to man. "For me, it's all about discovery," said Gyllenhaal.

Said Bear about the experience, "The wild is always very revealing – not only physically but mentally. You've got to smile when it's driving horizontal hail and be able to face your fears and just get on and do it — and on both of those accounts, Jake came up strong."

Bear revealed: "A couple of weeks ago I took Jake Gyllenhaal, reportedly the fittest man in Hollywood, on a Born Survivor to Iceland. He said he wanted to to be pushed and afterwards said he'd never been pushed so hard.

He went on: "We had crazy conditions – sleeping in snow caves, huge river crossings and these torrential storms. I was a little bit nervous as I promised Jake's management team I would keep him alive, but he was brilliant.

"There's something magical about the raw emotion of fear and nerves. I think that's what people like about the show."

Given the methods available to stay warm in such situations, it should be a glorious episode.

The show premieres on July 11.