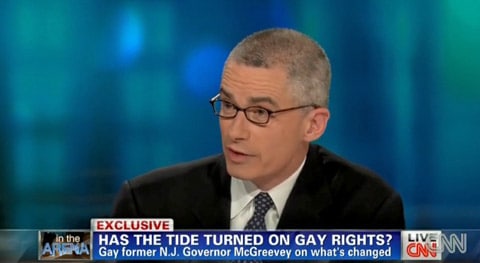 Former NJ Governor Jim McGreevey appeared on CNN's In the Arena with former NY Governor Eliot Spitzer (both, interestingly, resigned amid sex scandals) last night and discussed the NY marriage equality victory and whether it is a sign that the tide has turned on gay rights in America. He also discussed politicians whose positions are lagging on the issue:

"I think 10 years ago what Gov. Christie said was the norm by Democrats and Republicans and I think that will change," McGreevey said. "I think Gov. Christie, or whoever's governor across this nation, they will catch up with the decency of the American public."

And of President Obama, the former governor stated in a reference to the first lady, "If only he would listen to Michelle more often." The president stopped short of using the term "marriage" while endorsing equal rights for same-sex couples at a fundraiser late Thursday, but affirmed, "I believe that gay couples deserve the same legal rights as every couple in this country."

Now that the state of New York has legalized same-sex marriage, McGreevey admitted that he, too, is tempted to get married – but will wait until it is legal in his home state.

It was unclear whether McGreevey knows something about Michelle Obama and same-sex marriage that the general public doesn't, but she has never publicly come out for it.

McGreevey also addressed shame, something that drove him to closet himself for years, and notes how it is lacking in the younger generation, a fact which will propel equality. McGreevey, currently a divinity school student studying to be an Episcopal priest, also discussed how religious bigots manipulate the Bible to perpetuate homophobia.