New Jersey LGBT rights group Garden State Equality reports on its Facebook page that Democratic Senate President Steve Sweeney apologized for his vote against marriage equality in January 2010 in a speech on the Senate floor today. 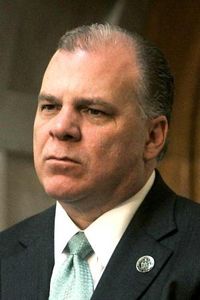 The 2010 vote took place in a post-election lame duck session when Governor Jon Corzine was in the last days of his term.

The AP is reporting on Sweeney's statement as well.

"Seventeen months ago, I stood up here and made the biggest mistake of my legislative career. I made a decision based purely on political calculations not to vote in support of marriage equality. I failed in my responsibility as majority leader of this house of government to actually lead. I was wrong. To my fellow colleagues, to staff, and to those watching upstairs, let me tell you: never, ever again will I allow that to happen. The time for political calculations is over."

"We welcome Senate President Sweeney’s support with open arms. The world evolves, and our responsibility as advocates is not to hold grudges, but to pass laws. Today we indeed have the votes to pass marriage equality in both houses of the New Jersey legislature. But we do not have enough votes, to be sure, to override Governor Christie's veto. It means New Jersey will have to win marriage equality through other means."

Previous Post: « Towleroad Guide to the Tube #913
Next Post: Rally for Marriage Equality Tomorrow in Albany at Noon »