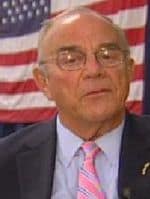 "I'm sorry to say that the bill's going to pass," Long told me in a phone interview minutes ago. He said that the recently released religious liberty amendment would serve as an "excuse for some Sepublican senators to hang their hat on."

"I know they've got the 32nd vote, and I think they've muscled two more people" to give the vote some cushion.

"Hopefuly all of that blows up," Long said. "I don't see that happening."