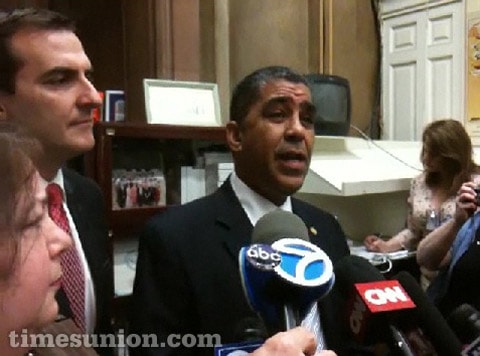 NY senate Democrats are pissed. Sens. Liz Krueger, Adriano Espaillat and Michael Gianaris held a press conference a short time ago on the hours wasted this week by Senate GOP with little action on many measures as well as marriage equality.

Said Espaillat: "To continue to play with people's lives is not acceptable."

But Thomas Libous, the Senate Republican deputy majority leader, said that negotiations were on track and that he expected votes on most issues early Friday afternoon. Asked whether gay marriage could be voted on Friday, Mr. Libous said yes. “Nobody wants to stay here tomorrow,” he said.

Gay rights advocates, who had been careful not to criticize the Senate Republican majority publicly, shifted their strategy on Friday, pointedly expressing their impatience.

“It’s time for a vote,” said Brian Ellner, the head of the marriage effort for the Human Rights Campaign, a gay rights group. “This is a democracy, and a supermajority of New Yorkers support equality. The time is now. Period.”

Meanwhile, the din of activists on both sides has died down as the Senate lobby is in lockdown, Rick Karlin reports:

I’m told that only senators, staffers and others with Capitol credentials, including the media, are allowed in this morning, and it’s strangely quiet after the non-stop din of chants, songs and shouts that the protestors have been raising for the past week. Observers, I’m told, are allowed upstairs on the gallery level, I haven’t been there yet but will check shortly.

Watch the Senate Dems getting angry, AFTER THE JUMP…