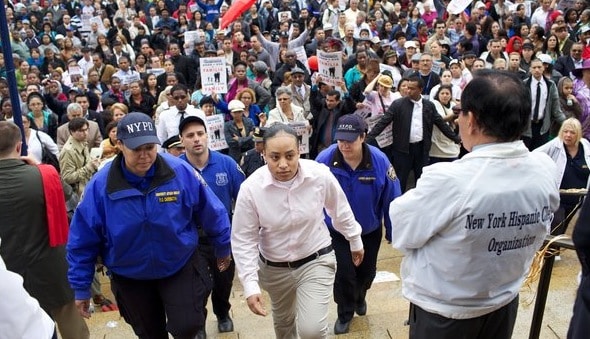 The New York Post has published an editorial by Erica Diaz, the openly lesbian granddaughter of anti-gay New York State Senator Ruben Diaz Sr. The 22-year-old reveals that her grandfather outed her to the public on television in an attempt to unconvincingly declare that he is not homophobic.

Diaz writes about what it was like to speak up for marriage equality across the street from her grandfather's hate march last month.

I decided to show up at his rally last month on the steps of the Bronx County Courthouse so that he could face a person he loved, a person who was gay, as he spoke against us. That day I waded through the religious crowd and saw children as young as mine say hateful things. "You're not God's child. One man, one woman. You're not living by God." I was so nervous that morning that I threw up. I spoke against him across the street, directly within his view. But then I approached a police officer who escorted me to the podium where he spoke

My grandfather introduced me to the crowd and kissed me on the forehead. "This is my granddaughter," he said. "She chose her way of life, but I chose God's way, but I love her." Grandpa even called me after the rally, to say that he was proud of me for "respectfully speaking up for what you believe in." You cannot tell someone that you love them and stay silent when people call for their death. "Love" is empty when you say someone's life isn't natural. He could quietly vote "no" if that's what he believes is right. But I want him to know that every word he utters hurts his own blood.

You can read the rest of her editorial here.