The maxim that the states know best when it comes to policy is not new. But, the idea that states are better at crafting policies for their particular citizens either because state representatives are somehow more representative of the people than national representatives or because of a belief in the federalism of our system has been tossed from right to left, from conservative to liberal, depending on the political winds of the day. 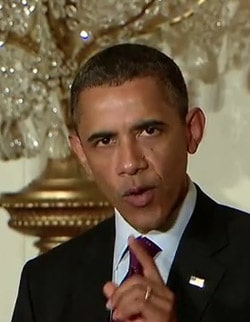 At various points during our history, so-called "states' rights" has been championed by "little d" democrats of the early Republic as against the Federalists' desire for a stronger central government; by southern slave state Democrats against northern Whigs and Republicans who wanted to keep the union together and abolish slavery throughout the nation; by "capital p" Progressives like Louis Brandeis, who called states the "laboratories of democracy" (although more recent scholars persuasively suggest that Justice Brandeis did not really mean to side with the states' rights movement); and by modern conservatives who want to shrink the size of the federal government and lower taxes.

That is a long, circuitous way of asking: What the frak is up with President Obama's stated "states' rights" position on same-sex marriage?

Let's begin with the case against President Obama coming out in favor of same-sex marriage. There is, of course, the possibility that the president, a deeply religious man, simply does not support allowing gays access to the institution of marriage. And, do not look for this president to hide away his personal beliefs when it comes to public policy: like Robert Kennedy more than 40 years ago, President Obama believes in a public discourse infused with civic responsibility, virtue and morality. Read James Kloppenberg's study (available here) or read the President's 2006 speech on religion for proof. We will return to this in a moment.

In any event, even if the President opposes same-sex marriage at the moment, we know him to be a reasoning man, sometimes to a fault. He displays none of the doctrinal rigidity of social conservatives or President George W. Bush for that matter, all of whom seem so sure of their beliefs that no change in circumstance could ever persuade them to change their minds. So, if we take him at his word, as I do, that his position on same-sex marriage is "evolving," why won't he "evolve already," as a number of activists want.

First, the real politik rationales. While a majority of Americans now favor same-sex marriage, marjorities do not support it in North Carolina, Virginia and Nevada, three important states for the President's re-election. African-Americans and Hispanics, two large voting blocs that must show up in droves for the President to win are still opposed to allowing gays to marry (though the extent of those majorities have decreased slightly from 2006 to 2008 to today). Same-sex marriage is one of those "diffuse" political issues — it tends to attract a small, well-funded and vocal opposition, but the American majorities in support tend to be diffuse, disorganized and not ready to stake their vote on the subject. You and I might, but independents won't. This diffusion is true of sugar subsidies, too — the sugar lobby really cares about it, but you and I don't. So, if the President makes same-sex marriage an issue in the next election, he risks riling up a base of opposition and giving his voters reasons to stay home.

All of that seems reasonable enough for a politician. But, we expect more of this president.

Rachel Maddow was wrong on Friday night when she blithely said, "It should be noted that the President opposes what's going on [in New York] tonight." That's not true. The President made it clear after the New York marriage vote and at the LGBT Pride reception at the White House that he supports what happened in New York. So, why won't he come out in favor of same-sex marriage? Does it make sense for President Obama — as a private religious man and as the president — to support what happened in New York and oppose same-sex marriage on the national level?

To understand the President, let's study his life, his politics and his beliefs. The President is the son of a biracial couple. They could not have gotten married without Loving v. Virginia and the national legislation efforts of the Civil Rights Movement. He was raised in the post-Civil Rights Era, which is to say, a generation after older African-American leaders like Congressman John Lewis. To the detriment of his political standing, he made national health care a priority of his first term, including an individual mandate that forces people to buy health insurance at the demand of the central government. He is also a legislative pragmatist, content with getting what he can when he cannot get what he wants. These facts seem to counter each other: at times, his backstory would make him a nationalist; at times, it would make him a federalist. Maybe that is what his "evolution" is all about.

It seems odd that a product of the Civil Rights Movement would take on the states' rights canard, and that is what makes President Obama's stated position so frustrating. He's telling us a tall tale to hide his political motives. He could also be content with finding progress at the state level when he knows there is no chance for progress at the national level. Gay rights legal advocates would agree with him there; lobbyists have all but given up hope for national legislation, knowing that the Republican-controlled House will not allow a DOMA repeal to come to a vote, and where the President has any power over federal litigation, he is mostly doing his part, declining to defend DOMA.

I think what makes some of us disappointed in President Obama is that we have come to expect liberals to separate their political selves from their private selves when it comes to public policy. That's a double edged sword (exactly how is beyond the scope of this blog post), but it has come to characterize liberal opposition to social conservative hopes to change our society into a theocracy. But, the President does not fit this traditional liberal mode: his narrative personal history, his religious beliefs and deep ties to his family and multicultural traditions are too important to him to shove to one side when considering the most important questions of the day. We can disagree with him on the merit of that approach to public policy, but we cannot call him a hater because of it.

In his speech on religion in 2006, President Obama showed himself to be a new kind of progressive, and one that made me proud to support him at the time. He started by looking at how he dealt with an attack from a religious conservative in his Illinois U.S. Senate race who said the then-state senator was not a good Christian because of his liberal values. "I answered with … the typically liberal response," Obama said. "I said that we live in a pluralistic society, that I can't impose my own religious views on another, that I was running to be the U.S. Senator of Illinois and not the Minister of Illinois." In 2006, he said that response "did not adequately address the role [his] faith has in guiding [his] own values," beliefs and political decisions. It was wrong for Democrats to "abandon the field of religious discourse" in the political world to social conservatives. "The discomfort of some progressives with any hint of religion has often prevented us from effectively addressing issues in moral terms," he said. Without a moral discourse, liberals "forfeit the imagery and terminology through which millions of Americans understand both their personal morality and social justice."

The then-candidate Obama was reminding us that we cannot meet the middle of American politics by insisting on a form of secularism as strident as the doctrinairre religiosity of the right wing. "Secularists," he said, "are wrong when they ask believers to leave their religion at the door before entering into the public square. … [T]he majority of great reformers in American history [] were not only motivated by faith, but repeated used religious language to argue for their cause." Why must progressive be any different?

We want the President to "evolve already" and he is treating us like infants when he offers his states' rights rationale. The argument is transparent, at best. But, I don't think it's very easy to describe what's behind the states' rights shield. It's too easy to call this politics and leave it at that; we have every political reason to believe the President's leadership on this issue could gain him votes and show his spine. It's also wrong to call this President a hater; he believes in equality. Beyond that, it's hard for us to know. He is not going to separate his private life from his public life and that what makes his progressivism in other areas — health care, education, climate change and even free trade — so compelling. But, it makes his "evolution" a real struggle and endlessly frustrating to traditional liberals.

What we can learn from the New York marriage vote is how to push the President along his evolution. Given what we know about him, what arguments will be most persuasive? What tactics will be most helpful to get our point across? In next week's column, I will take a closer look at the evolution of the NY State Senators who switched their vote from 2009 to 2011 and what factors moved them forward on the path. Perhaps we can gain some insight into the struggle that you and I don't have to go through, but our straight allies may need.