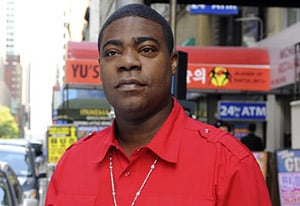 Says Morgan: "I guess the reason I am successful is because I am so unfiltered. And sometimes as a result I say really stupid s**t. The truth is if I had a gay son, I would love him just as much as if he was straight … I might have to try to love even more because I know of the difficulty that he would have in society."

Morgan adds: "Of all the sicknesses, there is probably none more abusive than homophobia. My heart is committed to giving everyone the same rights that I deserve for myself."

Morgan says that the controversy has helped him understand "how hurtful his words were" and tells Simmons that he supports marriage equality and would attend a rally in support of it:

"I believe everyone deserves the right to be happy and marry who they want too; gay, white, black, male or female. Let me know where the rally's at Russ. I'm there!"