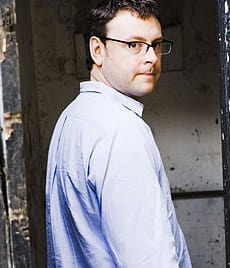 It's been a roller coaster of a week for Billy Elliot writer Lee Hall's new opera, Beached.

The piece, meant to debut later this month, was abruptly canceled because a participating school objected to some of its gay content. Hall (pictured) claimed they were discriminating, the opera company, Opera North, distanced itself from the mess, and the school was forced to deny allegations of homophobia.

Now it appears all parties are on the same page, because Beached will indeed go on, although with a few changes: The word "queer" will be replaced with "gay" in the following rhyme, "Of course I’m queer / That’s why I left here,”  to become “Of course I’m gay/That’s why I went away.”

The school, Bay Primary School, released a statement lauding the news, saying, "We are delighted to announce that the revisions which the school requested have now been made and the author has addressed the points raised by the school.”

The final libretto is now an age appropriate text which was all the school had requested. The play retained the inclusion of a gay character, Professor Sewerby, who remains central to the play’s dramatic message. Neither the council, school or Opera North have ever expressed any concern over the inclusion of a gay character, only some of the language and tone around the character’s identity. The writer has now addressed this.

Opera North described compromise as the result of "intense negotiations behind the scenes with all parties.”