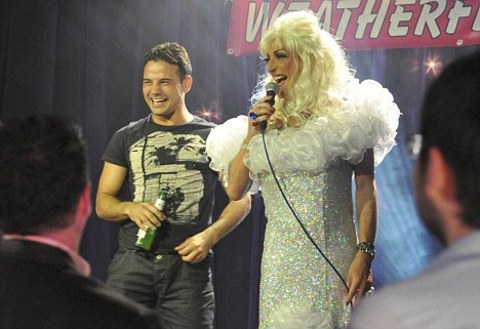 Goodness, England has had much same-sex drama this week.

First, of course, there was Lee Hall’s gay opera row, and now British art critic Brian Sewell has taken to The Daily Mail to decry LGBT characters on the popular soaps Coronation Street and EastEnders.

“There’s too much, not only of gay men … but also of lesbians, bisexuals, the trans-gender community, cross-dressers and everyone else with some sexual quirk or fetish,” wrote Sewell.

The dear old egalitarian BBC protested that its policy is to portray gay and heterosexual relationships in exactly the same way, both equally suitable for pre-watershed viewing. But are they equally suitable?
…
Are soaps, watched by pre-pubescent children — who may still have some tattered remnant of innocence that we should cherish — really a proper platform for sexual propaganda and special pleading?

Sewell also lamented that LGBT characters are “preaching to us from some supposed moral high ground.” The assumption, of course, is that gays can never have a moral high ground. Because we’re wicked and sinful and all that.

Actor Charlie Condou, who plays gay character Marcus Dent on Coronation Street, does not appreciate Sewell’s criticism, and penned his own op-ed in The Guardian to respond.

“Sewell seems to suggest there’s something morally reprehensible in being gay, and that there’s some kind of promotion of a gay agenda at work (led by a sinister-sounding “mafia”),” writes Condou. “In fact you barely see a kiss from the gay characters, just like our heterosexual counterparts. It’s not a ‘sexy’ show.”

Condou also says that he’s “proud” to be part of Coronation Street‘s historically inclusive heritage, and worries that Sewell’s article may be part of a greater, regressive trend:

Sewell’s article worries me because it seems to be part of a change in mood that reminds me of the Section 28 years, when everyone was shouting out that the gays were taking over. This week’s news that Opera North had pulled the plug on Lee Hall’s opera Beached over explicit references by a gay character to his sexuality has added to this. It feels like we’re moving backwards, and I find that shocking.

On the bright side, though, Condou’s article illustrates how far Britain, and indeed the world, have come; it wasn’t so long ago that actors, gay or straight, would ignore LGBT rights all together.