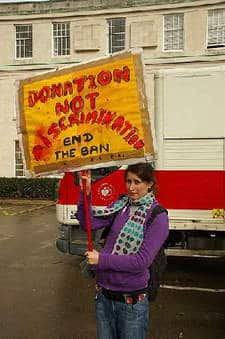 Most if not all LGBT people have experienced homophobia in their lives. So, too, do straight people.

Via the Chicago Sun-Times:

[Pace's] character and behavior prompted a blood donation center to reject him when he tried to donate blood recently and he’s miffed, to say the least.

“I was humiliated and embarrassed,” said Pace, 22. of Gary. “It’s not right that homeless people can give blood but homosexuals can’t. And I’m not even a homosexual.”

…During the interview screening process, Pace said he was told he could not be a blood donor there because he “appears to be a homosexual.”

The FDA, fearful of HIV infections, banned LGBT people from giving blood in 1983, meaning that anyone who is or appears to be homosexual can legally be discriminated against at blood banks from coast-to-coast.

Lifting the restrictions would flood blood banks with an estimated 219,000 pints of viable and much needed plasma. The FDA, however, continues to drag its feet on lifting the outdated and offensive prohibitions.