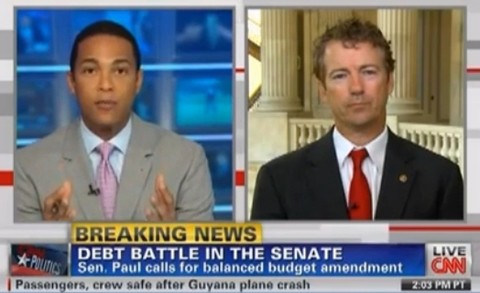 Lawmakers are still fighting it out on our looming debt-ceiling. And as the Senators and Representatives debated into the weekend, openly gay CNN anchor Don Lemon hosted Tea Party Senator Rand Paul to discuss the process.

The exchange was probably more contentious than either imagined — though the interview began on a traditional note, it rapidly became a back-and-forth between Lemon and Paul, who the journalist derided for parroting his party’s talking points and refusing to compromise with Democratic colleagues.

Here’s a sample from the official CNN transcript:

LEMON: OK. Listen. The Democrats have made many concessions when it comes to what’s going on here, and even the Tea Party position it appears to most people remains rigid. The question is, have you made your point? And by continuing to go on with this, do you feel like you’re overreaching and that you’re going to lose the clout? And really, the respect that you’ve gotten, because when you’ve really made your point here and then most people will say, you have done a good job at it, but do you feel like you’re overreaching right now?

PAUL: Well, I guess the thing is that we have $14 trillion in debt and the Boehner plan and the Reid plan and whatever the mixture of the two will become, we’ll add about seven to $8 trillion over the next ten years. I think what’s interesting here is that people talk about Moody’s and S&P downgraded our…

LEMON: OK. Hang on, hang on. Can we just stick to that — we’re going to get to that, but hang on, let’s stick to the — hold on, please, be respectful here.

PAUL: Let me finish my thought.

Watch Lemon and Paul’s entire conversation, AFTER THE JUMP…