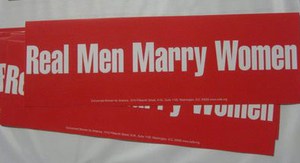 Conservative group GOProud spends much of its time cozying up to other right wingers, trying to get some ideological love.

Unfortunately for the organization, though, the rest of the right wing movement wants nothing to do with them: the American Conservative Union announced yesterday that GOProud will no longer be welcome at their annual Conservative Political Action Conference.

Well, that's what right wing website WorldNetDaily reports, claiming to have seen a letter from the ACU to GOProud explaining that other organizations balked at that group's inclusion.

According to GOProud, though, they haven't heard a peep from their would-be conservative allies.

We have received no notification from ACU. An ACU Board member told me this afternoon that they were unaware of such a decision and that to the best of his knowledge no decision had been made. I certainly hope that is true. The last thing the conservative movement needs right now is a unnecessary, ugly and divisive fight. The stakes in 2012 are too great. GOProud’s number one goal is defeating Barack Obama. That should be the goal of every conservative organization.

Those familiar with CPAC and its culture — these "real men marry women" stickers are from last year's event — won't be surprised by this news. And, honestly, GOProud shouldn't be, either.