The 9th Circuit Court of Appeals, which last week ruled in favor of an LCR request for an injunction halting all discharges under "Don't Ask, Don't Tell", today gave the U.S. Government 10 days to state whether it plans to defend the constitutionality of the matter in court, the AP reports: 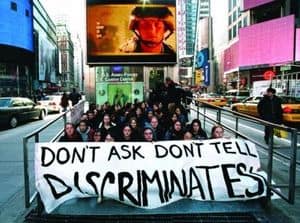 The three-judge merits panel of the 9th Circuit said after reviewing briefs from both parties in the case, that it appears the States is not prepared to defend the policy's constitutionality.

The order was not signed by the judges and it was not known if the three jurists were the same justices who ruled last week on stopping the policy's enforcement.

Log Cabin Republicans attorney Dan Woods said the court is forcing the government to take a stand on the issue.

DOJ officials could not be immediately reached for comment.

Read the order, AFTER THE JUMP…