A new strain of gonorrhea is resistant to all antibiotics, ABC News reports: 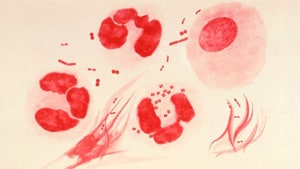 Since the 1940s, the sexually transmitted disease known as "the clap" has been easily treated with antibiotics. But the new strain of Neisseria gonorrhoeae has genetically mutated to evade cephalosporins — the only antibiotics still effective against the infection.

"This is both an alarming and a predictable discovery," lead researcher Magnus Unemo, professor at the Swedish Reference Laboratory for Pathogenic Neisseria in Örebro, Sweden, said in a statement. "Since antibiotics became the standard treatment for gonorrhea in the 1940s, this bacterium has shown a remarkable capacity to develop resistance mechanisms to all drugs introduced to control it."

Watch a report on the 'super' strain along with guidelines, AFTER THE JUMP…