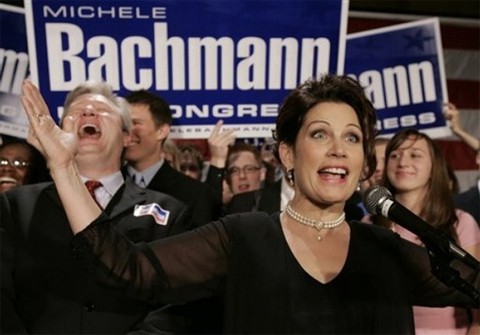 Well, that was fast.

Iowa conservatives yesterday asked Republican presidential candidates to sign a pledge that opposes marriage equality, Sharia law and bans pornography. None of those stipulations are that controversial — not for conservatives, at least.

The document, however, also contends that homosexuality is a choice, rather than a biological trait. I honestly thought, or at least hoped, candidates would be hesitant to back such an inflammatory declaration.

Apparently I was being overly optimistic, because Michele Bachmann, who’s married to an “ex-gay” counselor, has already given the pledge her John Hancock.

I sincerely hope that the mainstream media takes her to task on this one, because the “choice” debate is one of the most dangerous and incendiary weapons in the right-wing arsenal, and can be used to justify all sorts of discriminatory measures. If taken to the extreme, it could very well lead to the erection of “reeducation camps,” just like the ones Marcus Bachmann runs.