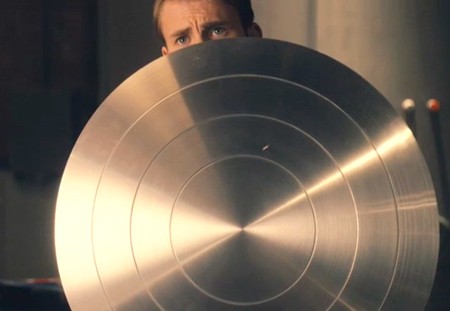 Cappy might be arriving a month too late for his own good, if he was hoping to be greeted by cheers and patriotic parades. The new would be blockbuster would’ve made a great fit for Fourth of July opening — damn those giant robots! Given that the studios like to frontload the summer they didn’t do this on purpose but I’m pleased to report that they saved the best hero for last. No, really. Cappy is just swell.

And not just because of that spectacular literal swelling that you’ve already seen in the TV spots when Chris Evans emerges newly muscled from that sci-fi silly metal cocoon.

Fact: that’s not even the peak of the scene. But we’re racing ahead and there’s more
AFTER THE JUMP…

When we first meet Steve Rogers (Chris Evans) it’s the early 40s and he’s getting the latest in what we learn is a long string of Class 4F stamps. He’s unfit for military service but this young man just won’t give up. The list of his physical deficiencies, briefly glimpsed in list form on the paperwork, is long but neglects to mention his most noticeable quirk: he’s got a skinny runt body with a movie star head awkwardly topping it, Benjamin Button style. But Steve Rogers does finally maneuver his way into the service of his country, via the help of expat German scientist (Stanley Tucci, having great fun with heavily accented cameo). Steve is selected as potentially heroic guinea pig, not for his movie star face, but for his heart and courage. The sci-fi experiment is a success and America’s first ‘super soldier’ is born.

The big money shot reveal of Chris Evans superheroic body kicks off a highlight reel of the film’s best scenes, starting with the most exciting action sequence. Before he’s even had a chance to acclimate to his new physicality, Steve is racing through Brooklyn streets barefoot in hot pursuit of a murderous Nazi. (Note to Green Lantern: Real life pecs and guns under a simple t-shirt and khakis is a way better visual effect than CGI musculature) It’s a standout entry in the ever-swelling ranks of “superheroes testing their powers” movie sequences in large part because it lacks the typical “look at me!” self-consciousness of those scenes. Steve Rogers is so self-effacing that he barely notices his own new magnificence in his relentless effort to beat the bad guy. After that novice bit of heroics, the US government launches the “Captain America” campaign in which our new hero’s mythology is created and marketed — we even see it in comic book form. (Cute)– to sell war bonds. The good Captain earns a musical number, a 40s pastiche from the movie’s go to musical man, Alan Menken.

Who’s strong and brave here to save the American way?
Who vows to fight like the man for what’s right, night and day?
Who will campaign door to door for America?
Carry the flag shore to shore for America?

The Star Spangled Man with a plan!

To get to the heart of why Captain America works, you have to concentrate on its midsection, it’s torso if you will. (That shouldn’t be a problem with Chris Evans at the ready.) It’s best to politely ignore its unwieldy contemporary prologue and epilogue sequences (Marvel Studios still hasn’t solved the movie riddle of how to make your movie feel complete while also selling your next movie) and concentrate on the 1940s. It’s possible that the fine period detailing is just great costuming and underneath the razzle dazzle, Captain America is just like every other superhero movie, but if so, it’s convincing camouflage. By dressing the superhero picture up as a World War II picture, and vice versa, Captain America seems to brush off the familiar cobwebs of all both genres: World War II pictures are often weighed down by their noble Oscar Aiming intentions but this one, with sci-fi and comic book do-gooding is lighter on its feet without sacrificing a war movie’s sadness (one major character dies and can we call it a minor miracle that you actually feel it as more than just a plot device?). Comic book movies are often burdened by their straining to be hip and contemporary cash cows but this one is free to embrace overt sentiment and corny humor which doesn’t feel so grating in a 1940s environment.

This is not to say that Captain America is a great movie. The prologue and epilogue don’t feel organic, the Cosmic Cube plotline doesn’t even pretend to make sense, and despite Hugo Weaving’s efforts as super intelligent evil nazi #1 (The Red Skull) won’t all movie characters of this ilk feel like pale reflections of Christoph Waltz in Inglourious Basterds from now on? In the end, it’s a solid entertainment and pleasant diversion. It’s a “good” movie: watchable, fun, occassionally lively. Captain America, like its altar ego Steve Rogers, is maybe a bit of a square. But Steve Rogers has heart and he grows on you.  Best of all, with its earnest commitment to retro spirit and nostalgic heroices, it gives you hope that maybe Wonder Woman would work as a movie after all.