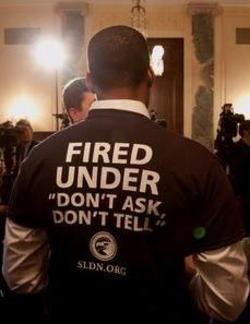 In the wake of a court's ruling that the United States must stop discharging openly gay soldiers, the Pentagon announced today that it will officially begin accepting applications from recruits who enjoy same-sex love.

The Pentagon has ordered a halt to all separations of gay troops under “don’t ask, don’t tell” and will begin accepting applications from prospective recruits who identify themselves as homosexuals.

The moratorium issued Friday came after a ruling Wednesday by a federal appeals court in California ordering the Defense Department to immediately stop enforcing the law. The court said the law is unconstitutional because it treats gay Americans differently under the law.

Meanwhile, defense officials will continue to prepare for the law’s formal repeal, which Congress approved in December. The law will be formally repealed 60 days after the defense secretary and chairman of the Joint Chiefs “certify” that it will not adversely impact military readiness.

Sheesh, this is the longest, most convoluted process. Why can't everyone just agree that Don't Ask, Don't Tell is finally dead? Protocol can be such a drag.