Texsa Governor Rick Perry, who made headlines over the weekend for his comments regarding states' rights and the passage of marriage equality in New York, has clarified those remarks in an interview with hate group leader Tony Perkins of the Family Research Council. 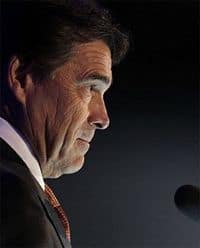 Said Perry to a group of donors in Aspen, Colorado last Friday:

"Our friends in New York six weeks ago passed a statute that said marriage can be between two people of the same sex. And you know what? That's New York, and that's their business, and that's fine with me," said the Governor. "That is their call. If you believe in the 10th Amendment, stay out of their business."

“I probably needed to add a few words after that ‘it’s fine with me,’ and that it’s fine with me that a state is using their sovereign rights to decide an issue. Obviously gay marriage is not fine with me. My stance hasn’t changed.”

Perkins said he looked forward to having Perry join him at the evangelical prayer event The Response, in early August.

You can listen to the full interview at the hate group's website.