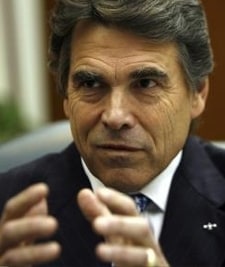 Hoping to recover from his ideological heresy, the Republican governor of Texas explained that he is an "unapologetic social conservative" and opposes same-sex marriage, a stance he repeated yesterday in a conversation with Tony Perkins, telling the hateful Family Research Council leader, "Obviously gay marriage is not fine with me."

Apparently that wasn't quite enough, though, because Perry again reiterated his opposition during a speech in Denver last night.

According to the AP, Perty told an audience at the Western Conservative Summit that the traditional definition of marriage "suits Texas and this governor just fine."

Me thinks the lady doth protest too much.