Rick Santorum frothed up at a campaign stop in Iowa yesterday, vowing to go to New York and help overturn the recently passed marriage equality law. 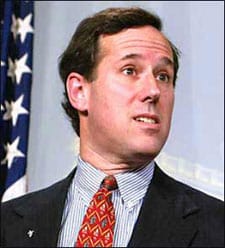 "They have to have the word. And with THE WORD comes a complete change in society. I am NOT, as some in this race have said, OKAY with New York doing what they're doing. What New York did was wrong. I will oppose it, and I will go to New York, if necessary, and help overturn it."

New York, unlike other states, doesn’t have a referendum process by which laws can be overturned, thus requiring opponents to lobby the legislature to approve a constitutional amendment banning same-sex marriage and then convincing a majority of New York voters to approve it.