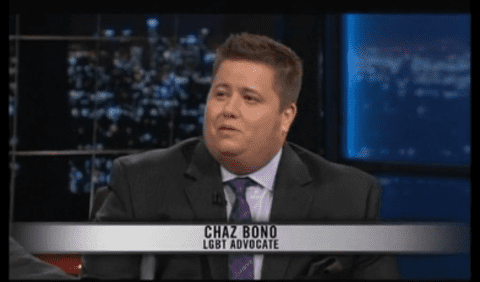 Conservative darling Ann Coulter and LGBT activist Chaz Bono had quite the interesting back-and-forth about religion and psychiatry on last night's Real Time with Bill Maher.

It all began with Maher discussing how a Fox News psychiatrist diagnosed Maher as "misogynist" because of how the comedian talks about Bristol Palin and Michele Bachmann.

The psychiatrist, Dr. Keith Ablow, has previously decried J. Crew for an advert featuring a boy painting his nails, and also said that Bono's transgender identity is a "psychotic delusion."

"Bono’s contention that she is male as a psychotic delusion—a fixed and false belief," Ablow wrote in an article Fox later removed.

When asked whether she would go to such a psychiatrist, Coulter, who agrees with Ablow's assessment of Maher, says, "I wouldn't go to a psychiatrist, period, because like Michele Bachmann and Sarah Palin and everyone else you despise, I do believe in God… We don't need shrinks."

Bono counters Coulter's claim, saying he believes in both God and psychiatry: "I’ve gotten great use of therapy and I also believe in God. So, I don’t look at them as two mutually exclusive things. I want all the help I can get." Amen.

The conversation then veers off toward the News of the World scandal, our criminal justice system and how Madonna wants to "take down" Sarah Palin.

It's all worth watching, AFTER THE JUMP…