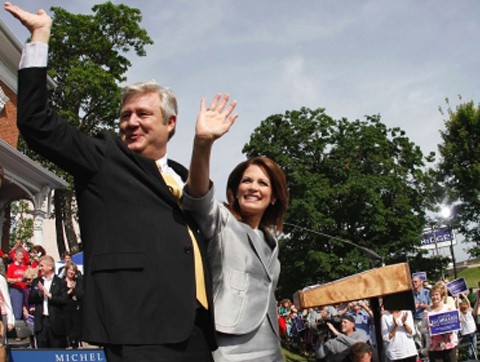 And as people start paying attention to the Bachmanns' anti-gay ways, John M. Becker from Truth Wins Out, a group that counters the "ex-gay" movement, has published an in-depth article about his time undercover at Mr. Bachmann's clinic.

Posing as a man struggling with his homosexuality, Becker called Bachmann & Associates and was immediately referred to a counselor named Timothy Wiertzema. And, not surprisingly, their six counseling sessions together were predictably religious and repressive.

After I mentioned a (fictitious) memory of discovering a hidden stash of male pornographic images in the bedroom of a friend’s older sibling, he said that this experience “obviously… had at least a little bit of a part” in the development of my homosexuality and asked, “What if you would have saw [sic] female pornography [instead]? Maybe you would be talking to me right now about your addiction to lust.”

Becker's article goes on to highlight how Wiertzema zeroed in on his masculinity and claimed that God wanted men to find women attractive:

Despite the fact that I never once mentioned having insecurities surrounding my own masculinity, Wiertzema took it upon himself to reassure me in our fifth session that “…because you have feelings of homosexuality, [it] doesn’t mean you don’t have masculinity. I’m just gonna go ahead and say that.” I was encouraged to further develop my own sense of masculinity and my personal definition of what it meant to be a man.

When I mentioned that I can objectively acknowledge a woman’s beauty without having any sexual feelings toward her whatsoever, I was told that whenever I saw an attractive woman I just needed to reinforce in my mind that she was, indeed, attractive, and that God made her this way and made me to notice her. After all, “God designed our eyes to be attracted to the woman’s body, to be attracted to everything, to be attracted to her breasts.”

Taken together, Becker's time at Bachmann & Associates led him not back to the closet, as Wiertzema would have hoped, but to a damning conclusion:

There can no longer be any doubt that Marcus Bachmann’s state- and federally-funded clinic endorses and practices reparative therapy aimed at changing a gay person’s sexual orientation, despite the fact that such “therapy” is widely discredited by the scientific and medical communities.

It’s time for Michele and Marcus Bachmann to stop denying, dodging, and stonewalling. They owe it to all Americans to provide a full and honest explanation for their embrace of these dangerous and fraudulent practices.

Becker's report will surely put more media pressure on Michele and Marcus Bachmann, but it could also pose two serious problems for Mrs. Bachmann among the Republican voters she hopes to court.

One, it reminds right-wing voters that the husband of a candidate who opposes "big government" spending is receiving state and federal dollars for his business. And, two, it reiterates to more moderate Republicans that Mrs. Bachmann endorses a morally dubious practice that seeks an homogenous America, a concept that runs counter to what this nation represents. They can't seriously support such a candidate, can they?

As for Democrats, Becker's article presents them with the opportunity to come out against Bachmann & Associates and other "ex-gay" clinics, but I'm not holding my breath for that one.