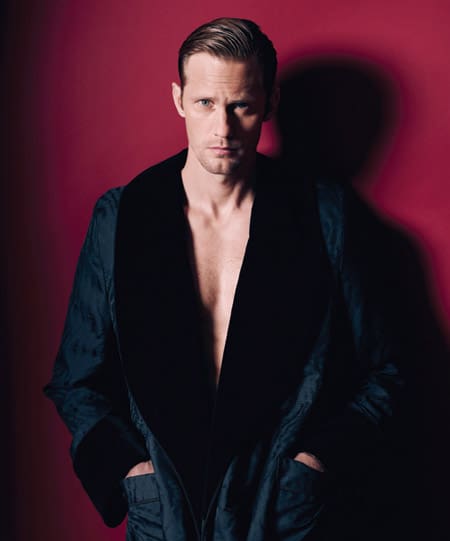 BlackBook describes some horseplay on the True Blood set in a new interview with Alexander Skarsgard:

Before the cameras begin rolling, Skarsgård walks up to his mark in the center of the room, Moyer kneels in front of him—his character is picking something up off the ground when the shot begins—and the director watches them from his chair in front of a camera monitor. While waiting in their places, Skarsgård looks down at his costar and says dryly, “It looks like he’s sucking me off,” to which Moyer responds by bobbing his head vigorously. Skarsgård closes his eyes and starts moaning with the intensity of a slash-fiction hero, after which Moyer stands up and wipes imaginary fluids from his mouth with the back of his hand. He scans the crowd and after taking a slight bow says, “And the Emmy goes to… ” A crew member whispers to no one in particular, “Now that’s what I call ‘Action.’