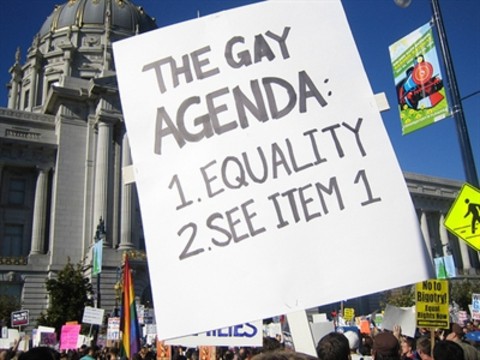 Michele Bachmann did a wonderful job dodging Meet the Press host David Gregory’s questions about her homophobic policies this weekend.

“I’m running for the presidency of the United States” became the Republican presidential candidate’s mantra as Gregory asked her why she has built a career on anti-gay rhetoric yet won’t admit any bias against the LGBT set.

Bachmann clearly wants to avoid such questions, and the only explanation I can think of is that she’s fearful her extreme politics will turn off voters. This got me wondering: could anti-gay politics sink a presidential campaign?

As we learned during George W. Bush’s 2000 and 2004 campaigns, the right-wing once salivated over stopping equality. John McCain, however, did not rely as much on social conservative fear-mongering in 2008. Though many in the conservative camp still oppose hate crime, non-discrimination and marriage rights, the nation is clearly moving toward a more inclusive place.

A Gallup Poll found that 53% of Americans support same-sex marriage. The Public Religion Research Institute, CNN, the Washington Post and ABC News have also all found majority support. What’s more, most of the nation supported Don’t Ask, Don’t Tell’s repeal and are against DOMA.

All of these numbers reflect the fact that LGBT people are becoming more visible, and therefore more accepted, than ever in American history.

With the 2012 race heating up — and as LGBT activists in states like Oregon and Maine trying to put same-sex marriage on their respective ballots, and as the Proposition 8 trials continue, virtually guaranteeing the issue a national spotlight — it will be interesting to see if the right starts unearthing and highlighting their archaic, exclusionary politics, or whether they’ll try to avoid the issue all together. Most have already said they support a federal ban on gay marriage, but will candidates who have employed hyperbolic homophobia — see also: Rick Santorum — start saying they are “evolving” past such hate?

And, most importantly, how will the public respond to the possible revival of homophobic politicking on a national level? As voters become more accepting of their gay friends and neighbors, will they be revolted by Bachmann and company’s discriminatory ways? Will being seen as intolerant and exclusionary help or hinder presidential candidates?