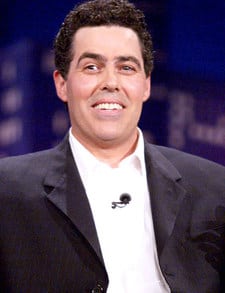 I have heard some pretty disturbing rants in my years reporting on LGBT politics.

Politicians call us deviants, others say we're pedophiles or liken our relationships to bestiality. And still other opponents claim we're part of Satan.

Few diatribes, however, are as despicable and repulsive as Adam Carolla's remarks about LGBT — particularly transgender people — on last Thursday's episode of his podcast.

Discussing a petition calling for Sesame Street characters Bert and Ernie to get married, and the term LGBT, Carolla commented, "When did everybody get fucking lumped in with the gays? Really? What percentage is transgendered?"

He then went to asked, "When did we start giving a shit about these people?"

The former Man Show host even wondered about the various permutations of trans-identity, like post-op female-to-male, at which point he took a cheap shot at Chaz Bono: "Every time I see Chaz Bono, my cock looks at me and says, 'Wha?''

As if that's not enough, he also says that LGBT people need to "shut up" about equal rights.

Ug, it's all so gross. It's not even as if Carolla's making a self-aware joke. He's just being hateful. (If you have the stomach, you can listen to the audio here.)

You can bet your bottom dollar that GLAAD is all over this, and this after released a statement not only condemning Carolla's remarks, but reminding readers that the "comedian" has a history of anti-gay language: he has previously said that same-sex couples are not as good at parenting as their straight counterparts. What's more, GLAAD points out that Carolla derides other social and cultural groups, as well:

…LGBT people are hardly the only community about which Carolla has made ignorant remarks. In the past, Carolla has called the people of Hawaii “dumb,” “stupid,” “in-bred,” and “retarded” people who are among the “dumbest people we have.” Last year, Carolla referred to a Filipino boxer as being illiterate, having brain damage, and someone who prays to chicken bones – and stated that this boxer was ‘all the people of the Philippines have.’

In the group's statement on the matter, Herndon Graddick, GLAAD's Senior Director of Media Programs, remarks, "Given his history of anti-gay and racist comments, networks and advertisers should know what their money is supporting if they choose to hire Adam Carolla. The gross intolerance that he tries to pass off as comedy should not have a place on our airwaves.”

These sorts of comments don't belong on our airwaves, in our latrines, or anywhere else. Sadly, they do, and you can hear his audienec yucking it up in the background.