Morrissey clarified his recent remarks comparing the Norway massacre to the murder of animals for the fast food industry, in a statement to fan site True to You: 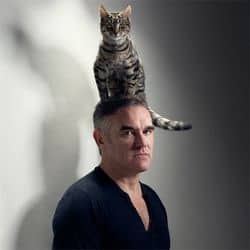 "The recent killings in Norway were horrific. As usual in such cases, the media give the killer exactly what he wants: worldwide fame. We aren't told the names of the people who were killed – almost as if they are not considered to be important enough, yet the media frenzy to turn the killer into a Jack The Ripper star is …. repulsive. He should be un-named, not photographed, and quietly led away. The comment I made onstage at Warsaw could be further explained this way: Millions of beings are routinely murdered every single day in order to fund profits for McDonalds and KFCruelty, but because these murders are protected by laws, we are asked to feel indifferent about the killings, and to not even dare question them. If you quite rightly feel horrified at the Norway killings, then it surely naturally follows that you feel horror at the murder of ANY innocent being. You cannot ignore animal suffering simply because animals 'are not us.'"