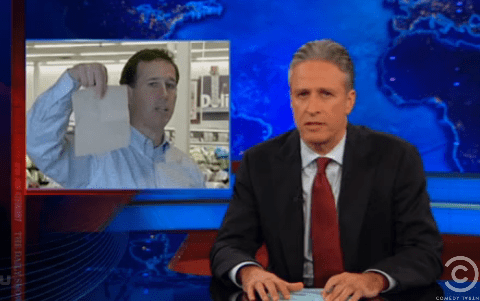 Jon Stewart spent some time on last night’s ‘Daily Show’ discussing Rick Santorum’s tenacious, ridiculous arguments against gay marriage, like the presidential candidate’s odd comment, “[Changing the definition of marriage] like saying this glass of water is a glass of beer,” as well as Santorum’s use of that “napkin versus paper towel” analogy.

The comedian also brilliantly notes how President Obama claims he won’t defend DOMA, yet his administration is happy to back DOMA’s lesser-known qualities, like the fact that binational married gay couples can be separated via deportation.

Watch Stewart’s send-up, AFTER THE JUMP…

Previous Post: « NOM Spent Over $700,000 In Anti-Gay Minnesota Fight
Next Post: Obama Calls On Syria’s Assad To Step Down »