In the new issue of Parade magazine, Brad Pitt talks about how he split with religion when he realized it couldn't answer basic questions that he had: 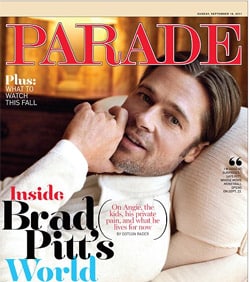 “My religion was telling me what not to do—what not to even think about doing. Those are the things I would try, because that was my nature. I had to experience things to know what would work for me—say, something as simple as premarital sex. I can figure out what works or doesn’t work. I will know. You say that something is wrong for me to do? Well, I know it’s not wrong because I just did it. Then you say something else is also wrong? Yeah, I did that too, and you’re right, it is wrong for me. But it wasn’t wrong just because you told me it was.”

He also had questions about same-sex marriage:

“What are you so afraid of? That’s my question. Gay people getting married? What is so scary about that? It’s complicated.  You grow up in a religion like that and you try to pray the gay away. I feel sadness for people like that. This is where people start short-circuiting—instead of being brave and questioning their beliefs, they are afraid and feel that they have to defend them.

“I don’t mind a world with religion in it. There are some beautiful tenets within all religions.  What I get hot about is when they start dictating how other people must live. People suffer because of it. They are spreading misery.

On the continuing battle for equality:

“Can you believe that we’re still fighting for equality in America? To be against marriage for everyone is utter discrimination.  I feel strongly about that because if equality of marriage doesn’t happen now, the next generation will have to deal with it.

Brad Pitt to the World: Open Your Eyes [parade]

Previous Post: « Towleroad Guide to the Tube #968
Next Post: 70 Years After Discharging Him for Being Gay, Navy Changes WWII Vet’s ‘Undesirable’ Discharge to ‘Honorable’ »