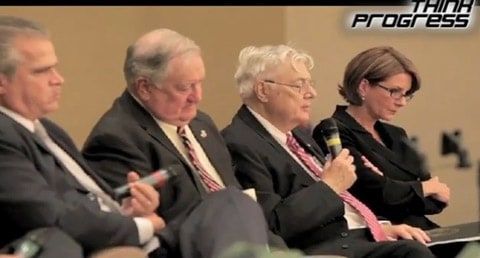 Igor Volsky at Think Progress LGBT posts a video of a North Carolina town hall last night at which Senator (and medical doctor) James Forrester (R) professed his love for gays, and then said people needed to reach out to gay people to get them to change back to a "normal" lifestyle.

"I’ve got a few homosexual patients and I treat them just the same as anybody else. I love them perhaps even more because I know they are going to die at least 20 years earlier and it’s something I have no control over and we need to reach out to them to try to get them to change their lifestyle and back to the normal lifestyle which we can accept."

The town hall was attended by five other state lawmakers to discuss proposed constitutional amendments in North Carolina, including one that would ban same-sex marriage.

Forrester is the lead sponsor of the NC amendment to ban same-sex marriage, which would ban any recognition of any “domestic legal union” other than a marriage between an opposite-sex couple.