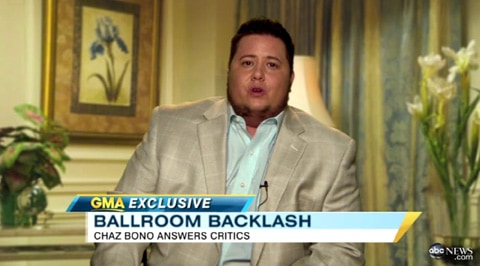 Chaz Bono appeared on Good Morning America this morning to discuss the controversy surrounding his participation on Dancing with the Stars with George Stephanopoulos. 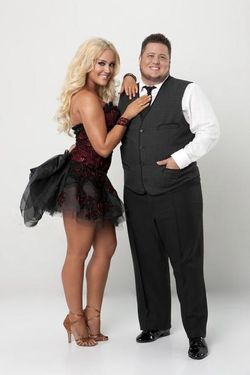 Said Chaz: "I'm going to be dancing. I'm not up on there talking about anything other than dancing. People who don't have gender dysphoria aren't going to catch it by watching me dance on television."

Stephanopoulos follows that response up with: "How's the dancing going? I heard you lost five pounds in the first six rehearsals?"

He then notes that Cher has been super supportive on Twitter, and asks Chaz, "Where's this coming from?"

Answers Chaz: "From being a mom! Nothing to get a mom on board than talking badly about their kid."

STEPHANOPOULOS: And you say you just want to come out there and dance, and we're looking forward to seeing you dance, but what do you say to the critics who say that you are very self-consciously promoting some kind of political agenda?

BONO: I tell them to watch the show and decide after that.

STEPHANOPOULOS: So it's not going to happen?

BONO: It's a dancing show!

In related news, attorney Gloria Allred is calling attention to the controversy by holding a news conference announcing that she'll be dancing with transgender people on September 19 when the show premieres.